This post contains all the information I have collected to date for Caroline “Carrie” Augusta Kanistanaux. I will update the page as new information is gathered, so bookmark this page and check back often.

Carrie appears to be the daughter of Marleah (Moulton) Kanistanaux. The identity of her father is uncertain as well, but Laton Kanistanaux is suggested. She is identified as “Indian” in the 1870 and 1875 census records. She is documented as a sibling to Dr. Lee-o-netto. On her death record, her parents are both listed as “unknown“. 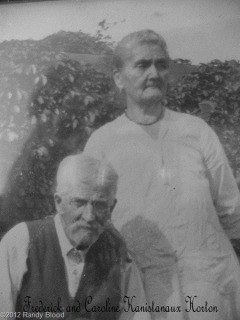 It is interesting to note that 1870 & 1875 are the only census identifying Carrie as “Indian”. Once she is married with a family she is identified as “white” in all census even though her siblings are being identified as “Indian”. In the 1920 Census she is labeled “white” but her mother tongue is given as “Indian“! Her death record lists her as white. Her obituary clearly shows Dr. Lee-o-netto as a sister. Her children received a Bible Story book from Lee-o-netto and they received inheritances from the estate of Lee-o-netto.

All content & images Copyright © 2011-2021 Ne-Do-Ba.
Unauthorized use and/or duplication of this material is strictly prohibited. Excerpts and links may be used, provided that full and clear credit is given to Ne-Do-Ba and nedoba.wordpress.com with appropriate and specific direction to the original content.